The Polish bipolarity towards the immigrants The problem of  the Middle East immigrants became a reason for an inflamed discussion among Europeans. On Saturday, September 12th  in Poland there were mass pickets concerning supporters and  opponents of welcoming immigrants.

Out of sheer curiosity and in order compare them I took part in both manifestation taking place in Warsaw. I wanted to understand the atmosphere and the  arguments of Poles towards immigrants.  The manifestations  began simultaneously at 4:00 PM. At first I decided to see the picket “Poles against the immigrants” next to the Palace of Culture and Science. Even thought it was raining and rather cold the manifestation atmosphere was rather hot.

A huge amount of people came with Polish flags, as well as immigrant related posters (one of which was titled  “Muslim immigrants are the Trojan horse for Europe” and had a picture of a wooden horse stylised to look like the ancient symbol). On a huge stage committed activists loudly and clearly spoke about Muslims’ hate towards Christians and other religions. They emphasised that those people are not able to assimilate and in no way are willing to adjust to rules of Polish society. According to the protesters Muslims will request changes in Polish law in order to secure their rights in the foreign territory. This kind of speeches were sometimes interrupted  by loudly chanted radical slogans. Averagely, every five to ten minutes outbreaks of fireworks and flares could be heard.  There were rumours from the stage that 75% of the immigrants are male, what is supposed to be surprising  since  according to Poles, majority of the immigrants should consist of women and children because men should be protecting their homes in their motherland. From time to time slogans like “Poles against immigrants” or “Jan Sobieski, triumphant king” could be heard. 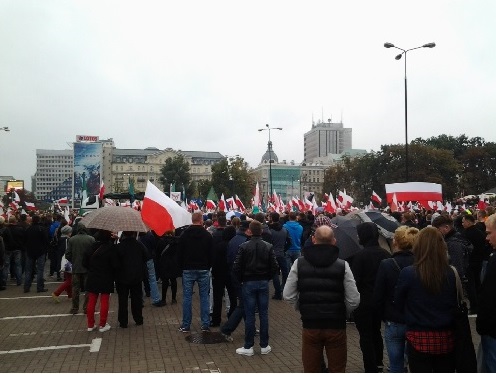 I’ve decided to talk with some people. When they realised I am not a Pole but a Ukrainian coming from the south, they decided they don’t like western Ukrainians, because they strongly relate to Stephan Bandera’s ideology. I couldn’t remain indifferent. I said that there are people in  western Ukraine who don’t keep Bandera in high regard and that people shouldn’t judge entire regions according to some ideological norms.  Shortly after, the conversation was stopped because nearly all gathered  started chanting the Nation Anthem. Later the demonstration was divided into groups, resembling almost war-like formations, and people started walking Marszałkowska street  towards Plac Zamkowy. During the march I met two boys – Radek and Wojtek, who were also against the immigrants. In their opinion the European Union, regardless to Polish capability and its citizens  is forcing Polish Government to accept immigrants. They criticized the decisions of hegemony-countries and their interference in Afghanistan, Iraq, and now Syria. According to Radek and Wojtek the decisions influence millions of people, including those living in Europe, because those people will suffer financial reprecautions of the inflow of immigrants. They claim that it is not certain that Poland will receive any financial help from the UE necessary to take care of the immigrants.  After our conversation the boys returned to the group of people heading towards Plac Zamkowy and I moved aside heading towards metro station “Świętkokrzyska”.

On my way there I have talked with yet another member of anti-immigrant movement – this time an adult forty-year-old man. He said that he agrees with the earlier heard slogans. He also agrees with the theory that immigrants won’t be able or willing to assimilate to the Polish society and that in time there will be millions of Muslims coming to Poland; moreover he was convinced that they will be trying to impose their laws and traditions onto Poles.  He claimed that sooner or later a tragedy similar to one in the French magazine Charlie Hebdo will take place in Poland. Finally I parted company with him and entered metro, a while later I exited it at “Nowy Świat – Uniwersyter” station.

Next to that station there is a Mikoyan Copernic statue, where there was another manifestation: “Welcome immigrants!”. The immigrant supporters were easy to recognise by their green colour-themed banners and posters.  At this manifestations the activist explained how the situation took place what  forced  the immigrants to abandon their homes; as well as reminded people it is our duty to be  a humanitarian society, not divided by religion or ethnicity. One of the spokesmen said that Poles should react to this tragedy and help the immigrants. This manifestation presented its open-mindedness by Arabic mini-courses. For instance  “Marhaban” is the Arabic word for “Hello”. 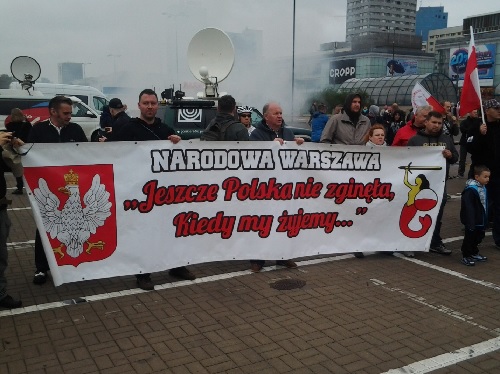 “National Warsaw: “Poland has not yet perished, So long as we still live..”(first verses of the National Anthem)”

I’ve decided to talk with these people as well. I med Marek who came to this action in order to look from the side-lines and meet his friends who decided to loudly express their opinions. Generally, this Pole is not against accepting more immigrants than the government is willing to accept. But he doesn’t argue that there is a risk of some separate instances of violence from immigrants, since they are in a seriously difficult to bear situation and it may cause some outbreaks. In order to prevent such instances Marek believes it is necessary to provide immigrants with suitable accommodations  in Poland.

Some foreigners could be found among the participants of this manifestation, they also decided to show their standing when it comes to the problem of the increase of immigrants in Europe. Janet from Eritrea has lived in Poland for 11 years, and like no other can understand the immigrants because in her motherland  army conflicts often influenced lives of regular people. She claimed that Poles are very open and supportive just like she is; moreover, she states that there are many organisations that help immigrants from different counties, and what’s more important in her opinion Poland is a safe place to live. It was nice to see that people responsible for organising this manifestation didn’t limit themselves to only talk about immigrants but also decided to warm up the gloomy weather with some music similar to African melodies. I’ve decided not to waste such an opportunity and myself began a warm up with the music. 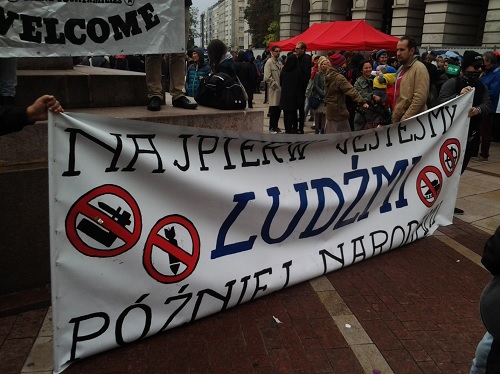 “First we are people then nationalities”

Before I returned home I met my Polish friend – Tomasz, who like me couldn’t impassively walk next to such an event. He said that he’s simply following his heart and humanitarian ideals. In his opinion Poland is definitely able to help Muslim immigrants, even though not all Poles are mentally ready , he believes everything can change.  When Tomasz watches films and photos illustrating the journey and difficulties that the immigrants face in order to get to Europe, he understands that we can help people who left all their possessions behind in order to fight for a better future.

After the talk with Tomasz I’ve finally decided to go home. It was really interesting to see that at the end of the same street mere three hundred meters further the  Anti-immigrant demonstration, with its national anthem and chants  was  still taking place. Both pickets took place in somewhat odd, nearly festive atmosphere. Although there were many police officers keeping order on both manifestations there were no violent incidents at all.